Showing posts from May, 2012
Show All

May 31, 2012
Courtesy:-  Momina Ashier Pakistan and India, the only two nuclear states of South Asia, share a relationship of conflict and cooperation. For the past three decades, India and Pakistan have been engaged in a nuclear rivalry that is both a symptom and a cause of their bilateral discord.  India’s decision to acquire nuclear weapons and demonstrate its nuclear weapons capability in 1974 resulted in the Pakistani adoption of a nuclear weapons program. When in May 1998 India and Pakistan conducted nuclear tests, abandoning nuclear ambiguity for overt nuclear weapons capability, international community raised concerns that each step up the nuclear ladder by India and Pakistan introduces a new tension in their troubled relationship. The apprehension possesses that nuclear expansion between these two states will threaten the international security generally and South Asian regional stability particularly.
1 comment
Read more

May 28, 2012
Courtesy:-  Malik M Ashraf The ruling by the Speaker National Assembly that no question of disqualification of the Prime Minister had arisen as a consequence of his conviction by the SC in the contempt of court case, has stirred up yet another furious debate on the legitimacy of the conclusions drawn by her. The opponents of the government and the section of the media essentially hostile to the government are shouting at the pitch of their voices dubbing her decision as partisan and against the constitution that might pit the parliament against the judiciary, whereas the permeating view in the government circles is that the speaker has used her constitutional powers under article 63(2) to giver her verdict and it has resolved the matter for good. The conflicting view taken by the two sides are quite understandable in the backdrop of an ambience of confrontation reminiscent of the crass politics of nineties.
Post a Comment
Read more

Chicago and the aftermath

May 28, 2012
Courtesy:-  Zafar Hilaly There’s scarcely a dull moment in US-Pakistan relations. The two countries are frequently at odds, and that’s not necessarily a bad thing. As Aristotle said: “To get angry at the right things and with the right people, and in the right way and at the right time and for the right length of time is something to be commended.” Loosely understood, this means a certain degree of constructive tension is useful in interstate relations as it is in personal relations. If nothing else, it prevents either party taking the other for granted.
1 comment
Read more 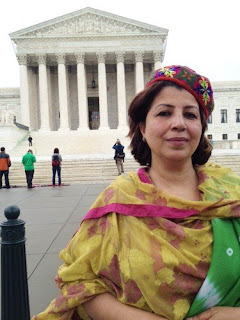 Courtesy:- Swanee Hunt Activist Mossarat Qadeem is fighting extremism in Pakistan one child at a time—with the help of their moms. Her phone rang at 9 p.m. “Can you come tonight? He’s home.” The voice was anxious. “My son left those extremists he took up with, but maybe just for the night.”
Post a Comment
Read more

May 23, 2012
Courtesy:- Mehr Tarar May 27, 2012. Mr Yousaf Raza Gilani will become the longest serving prime minister in the history of Pakistan. Hallelujah. Pakistan, a proud democracy. After 65 years, 16 prime ministers (a couple of lifetime chairpersons of their respective parties served twice), four military dictators, six caretaker governments later, here we are. Doing our best, and sometimes even that ain’t enough to throw the incumbent off his democratically gained seat. Déjà vu? Time to let go of the pretence, presumably. We will not let any government serve its full tenure. Period. That is not part of our psyche, our conditioned personalities, and our conscious and subliminal knowledge. There is impatience, a misplaced anticipation, and an undignified rush to topple one and take his place. If a morally indignant and spiritually superior military general will not oust a civilian leader, why go through the agony of waiting for one? The pristine, untainted, dry-cleaned garbed — the pious o
Post a Comment
Read more

May 21, 2012
Courtesy:- Dr Maleeha Lodhi The economic conference organised earlier this month by the Jang Group and the Times of India did more than bring together business leaders from Pakistan and India. The meeting in Lahore offered a timely opportunity to assess progress in the trade relationship, review the benefits of liberalisation, identify the hurdles, and propose ways to overcome them.
Post a Comment
Read more

The PM’s visit to UK

May 21, 2012
Courtesy:- Dr Rashid Ahmad Khan Prime Minister Syed Yousaf Raza Gilani’s just concluded visit to Britain is certain to further enhance understanding and cooperation between Pakistan and Britain The dust raised by unremitting domestic political crises has tended to obscure largely from the public eye certain outstanding successes the PPP-led coalition government has achieved on the external front during the last four years. To bring India around to accepting Pakistan’s proposal for the resumption of stalled peace talks without any preconditions is not a small achievement. It has won Pakistan worldwide acclaim, and endorsement by almost all the mainstream political parties and business community of the government’s decision to expand trade ties with India is reflective of its success in pursuing the country’s foreign policy in the correct direction.
Post a Comment
Read more

May 21, 2012
Courtesy:-  Wajid Shamsul Hasan LONDON: Despite hopes to the contrary of the hullabaloo of media doomsayers the official visit to the United Kingdom by Prime Minister Syed Yusuf Raza Gilani has triumphed as mother of all visits during last 25 years by the previous prime ministers except martyred Mohtarma Benazir Bhuttoís in 1994. Difference in his visit and others was quite obvious. He was representing a democratic Pakistan while others were totalitarian rulers. And this was the fact recognised by host Prime Minister David Cameron when he praised Prime Minister Gilani for his unprecedented efforts in strengthening democracy. Prime Minister Cameronís further endorsement that ìthe enemies of Pakistan were enemies of Britain and friends of Pakistan were Britainís friendsî must have thrown cold water on the critics of Pakistanís democratic government who had not only done their dirty best in undermining his visit in Pakistan but had also carried on a vicious campaign in UK. On arriva
Post a Comment
Read more

While there are bigger issues at hand

May 16, 2012
Courtesy:- Malik Muhammad Ashraf We are back to the crass politics of nineties marked by intense polarisation and political vendettas. The brand of politics that not only culminated in the derailment of democracy in the country but also left deep scars on the political landscape which continue to haunt the Pakistani nation. The Sharif brothers enjoy the dubious distinction of starting that despicable drama in collaboration with the establishment in the nineties and now again share the blame. They do not seem to have learnt from their past mistakes. They are crying hoarse from every convenient roof-top to urge the prime minister to abdicate power on moral grounds after the SC verdict but do not realise that it is also their moral obligation not to mislead the people on crucial national issues. Their actions are also politicising the judiciary.
Post a Comment
Read more

May 10, 2012
Courtesy:-  Sajjad Shaukat Since the Supreme Court of Pakistan has been hearing the cases of the missing persons in the country, the situation of Balochistan is more serious in this respect, where sense of deprivation and grievances has already accelerated among the people. But it is most regrettable that without paying attention to the facts, our own political leaders, media anchors and so-called human rights groups have continuously been maligning country's key security agencies regarding the disappeared persons of Balochistan. In this regard, these internal elements have ignored the services of Pak Army, Frontier Constabulary (FC), Inter-Services Intelligence (ISI) and Military Intelligence (MI).
Post a Comment
Read more

May 09, 2012
Courtesy:- S M Hali Improvised Explosive Devices (IEDs) are wreaking double havoc in Pakistan. Firstly, their incessant use by miscreants is resulting in the loss of precious human lives and limbs. Secondly, Pakistan is being blamed for alleged complicity in the transportation of raw material (Ammonium Nitrate) used in the preparation of the IEDs. A number of international bodies and think tanks have conducted research but trust deficit between Pakistan and its erstwhile allies in the war on terror has led the studies into the subject to be colored by wrong perceptions and accusations of Pakistan’s complicity in the heinous crime. One such report is by the “Perceptors Group”, which painstakingly conducted an in-depth study on the issue of human sufferings specifically due to IED attacks causing immense human loss in Pakistan and Afghanistan. However, some elements in the group, perhaps owing to their own biases or due to unreliable inputs, could not resist pointing fingers towards
Post a Comment
Read more

May 08, 2012
Courtesy:-    Mohammad Jamil Despite Pakistan’s vociferous demand to end drone strikes, eight suspected militants were reportedly killed in a U.S. drone attack on Saturday in Dre Nishtar area of Shawal valley. As if to add salt to injury, US Defence Secretary Leon Panetta in an interview said the same day that the US will continue to launch drone strikes against militants in Pakistan even if the Pakistani government opposes it. During an interview to PBS news, Panetta said: “The United States is going to defend itself under any circumstances.” Pakistan’s Foreign Office condemning the drone attack in North Waziristan stated: “It is our considered view that the strategic disadvantages of such attacks far outweigh their tactical advantages, and are therefore, totally counterproductive.” The nation has been listening to the foreign office vows and resolve for a severe response to any alien transgression into Pakistani territory; however in case of the super power Pakistan appears to b
Post a Comment
Read more

May 08, 2012
Courtesy:-    Malik Muhammad Ashraf Friday 4th May was an epoch making day in the parliamentary history of Pakistan, when the national assembly passed a bill for the establishment of National Commission for Human Rights, empowered to investigate cases of human rights infringement, create much needed awareness among the masses and hold the agencies and the army answerable to the Commission for any violation of human rights. The legislation, besides fulfilling our international obligations about improving human rights situation in the country, meets the demands of justice that require a uniform law to deal with such acts by the state agencies.
Post a Comment
Read more

May 04, 2012
Courtesy:-  Our Correspondent Punjab PTI has criticized the Punjab government for its double standards on corruption and poor governance. Flanked by Punjab general secretary Dr Yasmin Rashid and information secretary Andleeb Abbas, Punjab PTI president Ahsan Rasheed in a press conference on Wednesday stated that the PML-N had been criticizing the federal government but ignoring numerous cases of its own corruption and poor governance which had been highlighted by the media time and again.
Post a Comment
Read more

Implications of 'US-Afghan Pact' on Pakistan

May 02, 2012
Courtesy:-  Khalid Khokhar  May 3, 2012 The new strategic pact titled "Enduring Strategic Partnership Agreement between Afghanistan and the United States", has redefined the US terms of engagement with Kabul that goes beyond another decade following NATO troops withdrawal in 2014.
1 comment
Read more
More posts