Showing posts from April, 2015
Show All

April 30, 2015
Courtesy:-   Mohammad Jamil Martyrs’ Day will be commemorated to pay tributes to the martyrs of the Pakistan Armed Forces that rendered great sacrifices in defence of the motherland and also fighting terrorism. The intention to publish this article before 30th April is to suggest that the entire nation should commemorate this event, and the ceremonies should not be confined to  garrisons  only. Indeed, it was a good initiative by General Ashfaq Parvez Kayani who decided to observe April 30 as Martyrs Day from April 2010. Last year, on second Martyrs’ day Chief of Army Staff General Ashfaq Parvez Kayani paid tributes to the troops who laid down their lives in the line of duty. Addressing the ceremony, he had solemnly declared: “Pakistan wants peace with all its neighbours with dignity, but  national  honour and integrity will not be traded just for the sake of prosperity”. The armed forces have indeed played remarkable role in fighting the menace of terrorism and have successfully cl
Post a Comment
Read more 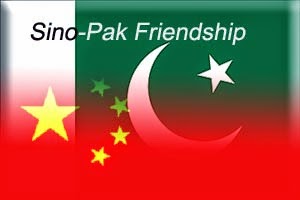 Courtesy:- SYED ALI NAWAZ GILANI  Sino-Pak relations: stronger than ever The Chinese President His Excellency Mr Xi Jinping is arriving today on a state visit to Pakistan after taking over the office of President of the People’s Republic of China on March 14, 2013. His visit was earlier postponed due to some preoccupied engagements on both sides. This visit is taking place in the backdrop of a very important geopolitical and regional situation apart from further boosting the exemplary Pak-China relations. This visit is also very important from the Pakistan’s political and economic point of view as we are currently engaged in Pak-China Economic Corridor project which if implemented in letter and spirit will enhance our economic activities manifold and the country will ultimately prospers. The visiting Chinese President who is also the head of ruling Communist Party is expected to lead China for the next decade. Since assuming leadership, he has initiated an unprecedented and
Post a Comment
Read more

April 13, 2015
Courtesy:-   S Rahman Although every government elected on the basis of popular vote possesses the inherent authority to make action plans according to changing situations and exigencies on the internal and external fronts, Nawaz Sharif government has taken up the matter with the parliament for arriving at the right decisions about the country’s possible role in Yemen crisis. Not only that, the Prime Minister has rather appealed to the parliamentarians to decide what course of action should be adopted particularly after receiving a formal request from Saudi Arabia for extending military support to the latter. The decision thus made by the parliament would be abided by as assured by the PM himself on the floor of the House during the joint session of the parliament the other day. This is indeed a manifestation of democratic mindset of the people in the government. This advice has been sought by the Prime Minister in all earnest although sufficient authority vests in his office and in
Post a Comment
Read more

April 08, 2015
Courtesy:-   S M Hali China's evacuation project may be its maiden humanitarian relief mission for future efforts to aid mankind in the face of indomitable odds, depicting China's willingness and capability to play a more constructive role in global crises The age-old concept of human relief campaigns is that it entails coming to the aid of mankind in distress, irrespective of nationality, religion, creed or beliefs. The people in need include the homeless, refugees and the victims of natural disasters (earthquakes, flooding, cyclonic storms, famines), military conflicts and other trials. The primary purpose of humanitarian relief is to save lives and reduce suffering while respecting human dignity. History is replete with examples of nations providing support to human relief campaigns. One instance is the response to the northern Chinese famine of 1876 to 1879, which was brought about by a drought in 1875 that claimed the lives of 10 million people. British missionary Tim
Post a Comment
Read more

April 06, 2015
Courtesy:-  Maiza Hameed “Deeper than the deepest sea, higher than Himalayas and sweeter than honey” the preceding phrase is generally used to highlight the closeness and intimacy of Pak-China relations. Both countries have enjoyed a long-term consistent goodwill towards each other. Both Pakistan and China are situated in an area that has great geographical importance and hosts almost half of the world’s population. Along with the human resources, the area is also rich in natural material resources. Also, three out of seven declared nuclear states of the world are situated here. Hence the importance of stability in the region and amiable relations between the countries, become a necessity. China is a fast emerging global power and it has registered fast and sustained economic growth. China share in the world trade has exceeded $620 billion. Its relations with the United States, Japan, European Union and even India have broadened dramatically owing to its profile as world
Post a Comment
Read more

A concerned member of global fraternity

April 03, 2015
Courtesy:- S Rahman Acting like a responsible state and a concerned member of global fraternity, Pakistan has taken timely, effective steps to extricate its citizens from war-torn Yemen and simultaneously sent a high profile civil-military delegation to assess the ground situation for determining Islamabad’s role in case of existential threat to the custodian country of the Islamic faith.
Post a Comment
Read more

April 01, 2015
Courtesy:-   S M Hali  The 21st century will be the harbinger of prosperity to the continent under the guardianship of China as the century of Asia While addressing the Pakistan-China Media Forum on the 21st century Maritime Silk Road, China Pakistan Economic Corridor (CPEC) and One Belt One Road projects, Chinese Ambassador to Pakistan Sun Weidong praised the people of Pakistan in a unique manner. He stressed that the magnificence, discipline and splendour of the Pakistan Day parade gave an impressive message of the strength, resilience and courage of the people of Pakistan, who celebrated their national day in a befitting manner, despite the trials and tribulations that they have faced in recent years.
Post a Comment
Read more
More posts