Pushtuns will not accept India’s role.

October 12, 2011
Courtesy:  Mohammad Jamil Pakistan is facing a covert war from the CIA and RAW; and the recent strategic partnership agreement between Afghanistan and India would pose a serious threat on Pakistan’s western border.
Post a Comment
Read more 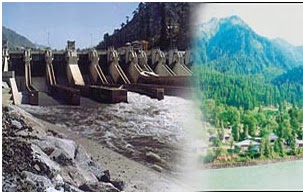 Res-gestae of interim order of ICA in Kishenganga case Cpurtesy By: Ali Nawaz Chowhan | Published: October 10, 2011 THE matter relates to the Indus Water Treaty, 1960 which was signed at Murree on 19 September, 1960 by FM Ayub Khan and Prime Minister Nehru as a sequel to a document of intention which was signed on 4 May, 1948 by Nehru and Ghulam Muhammad, the Governor General, Pakistan. Succinctly speaking Article 2 of the 1960 Treaty provides the unrestricted availability of the waters of the eastern rivers to India. The restrictive use is enumerated in the later sub paragraphs of the Article likewise Article 3 provides unrestricted availability of waters of western rivers to Pakistan while creating an obligation for India to let flow of the waters of these rivers without interference by India as mentioned in para 5 of the Annexure C to the Treaty.  The present cause of action has arisen because the parties failed to resolve the dispute concerning the Kishenganga H
Post a Comment
Read more

Afghanistan and the war

October 12, 2011
Courtesy:  Usman Ghani I t  is a known fact that the roots of present extremism in Afghanistan and Pakistan can be traced back to the Russian invasion of Afghanistan, when the Mujahideen were being provided help against the communists. The dangerously armed Mujaheeden were left alone by all to fight among themselves for Kabul after the Soviet Union withdrew. Many of those who fought against the Soviets are dead by now but their part of the land remains very much the same as it was during the soviet invasion.
Post a Comment
Read more

October 12, 2011
His master's voice Courtesy:OCTOBER 12, 2011 MALIK MUHAMMAD ASHRAF While the echoes of US allegations of ISI fighting a proxy war in Afghanistan could still be heard loud and clear, the Afghan President Hamid Karzai has also thought it fit to have a swipe at Pakistan by saying that the Taliban could not make any move without a nod from Pakistan. Though put in different words, the essence of US allegations and the incriminating statement of Karzai have an unmistakable synergy.
Post a Comment
Read more

October 12, 2011
Karzai’s plan for South Asia Courtesy By S.m. Hali | Hamid Karzai, the Mayor of the presidential palace in Kabul since his writ is limited to its four walls, levied charges against Pakistan’s premier intelligence agency, the ISI, of orchestrating the assassination of Professor Burhanuddin Rabbani, Afghanistan’s former President and Chairman of the High Peace Council. He then denounced the year-long peace negotiations with the Taliban and rushed off to New Delhi to sign a security agreement, much to Islamabad’s chagrin, since heretofore the Western powers had kept India at bay in Afghanistan to ward off Pakistan’s suspicions.
Post a Comment
Read more
October 03, 2011
BESOS means benevolence S Rahman Monday, October 03, 2011 Whenever and wherever the names of Zulfikar Ali Bhutto (ZAB) Shaheed and Benazir Bhutto (BB) Shaheed are discussed, the first impression that is formed in one’s mind is that of two highly humane personalities whose motto and mission of life was empowerment and well-being of the masses. ‘Masses are the fountain of power’ (Taaqat ka sarchashma awam hein) was the conviction of ZAB Shaheed. BB Shaheed proved to be the true torchbearer of that conviction as she carried it forward with the same spirit with which her late illustrious father embarked on the mission of ameliorating the masses’ lot especially that of the labouring and toiling classes. Farmers and industrial workers alike as well as the low-grade workers and employees of all organizations were the main focus of both the leaders.
Post a Comment
Read more
October 02, 2011

Resolution Of the conference of the leaders of all the political parties Islamabad , September 29, 2011 On the invitation of Prime Minister Syed Yusuf Raza Gilani, the leaders of Pakistan’s political parties met in Islamabad on September 29, 2011 to consider issues relating to national security 2.             The conference was briefed by Foreign Minister Ms. Hina Rabbani Khar and Director General ISI, Lt. Gen Ahmed Shuja Pasha on the security environment of the country and the regional situation. 3.             After in-depth deliberations, leaders of all political parties unanimously resolved, as follows.
Post a Comment
Read more
October 01, 2011
Talk to, not at, Pakistan By Asif Ali Zardari, Published in Washington Post : October 1 Democracy always favors dialogue over confrontation. So, too, in Pakistan, where the terrorists who threaten both our country and the United States have gained the most from the recent verbal assaults some in America have made against Pakistan . This strategy is damaging the relationship between Pakistan and the United States and compromising common goals in defeating terrorism, extremism and fanaticism. It is time for the rhetoric to cool and for serious dialogue between allies to resume.
Post a Comment
Read more
More posts